Entertaining, Engaging... and Surprising at Every Turn!

I could never be one of those authors who writes by a formula. My fans deserve better. And I have the kind of mind that fast-forwards a hundred steps and needs a lot to keep me engaged and interested. So I am constantly on the lookout for new ideas, different characters, detailed, engaging plots with twists and turns at every angle...

So when I decided to write a series, it was a huge step for me. Write about the same characters? In the same town? Me?

So, what makes Vicki's Key different from all my other books? And why was I confident this IS the series to write?

Vicki's Key is a cross-over genre. It's the mystery and suspense my fans have come to love. But unlike my other books, it starts off more slowly. Then like a ball rolling downhill, it gathers momentum until it has you by the throat, hurling you along at roller coaster speeds. Everything means something. EVERYTHING. Every piece of information comes together as you head toward the climactic scene.

It is also a ghost story. And Vicki Boyd, one of the main characters, is a psychic spy for the CIA. This crosses into the paranormal realm, but it's done so seamlessly that you'll feel like you are traveling from Lumberton, North Carolina to Afghanistan and back as Vicki unravels a plot against the United States Government.

Vicki saw her parents' deaths before it occurred. She was only 12 years old at the time and the adults around her either ignored her, chalked it up to an overactive imagination, or thought she might be losing her mind. But within weeks, her parents were dead and Vicki, along with her sister and two brothers, were placed into foster homes, scattered and separated for the rest of their childhoods. The incident attracted the CIA's attention and Vicki became the ward of the U.S.Government and trained as a psychic spy. 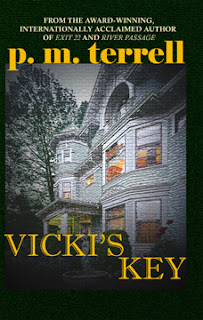 But when a mission known as the Amazon Incident goes horribly wrong, she decides to leave the CIA and start over in a small town, working for an elderly woman. It's only a summer job but it takes her out of Washington to a small town in southeastern North Carolina, where she can emotionally recover and decide what she wants to do for the rest of her life.

But when she arrives, she finds that Laurel Maguire has suffered a stroke and remains isolated on the third floor of a rambling mansion. And her nephew Dylan has arrived from Ireland to care for her.

The house comes alive with ghostly sightings - ice cold spots, icy hands at her back, visions of blood in the bathtub, a woman screaming at her to run... And Vicki begins to wonder whether she is losing her mind.

But she is also falling in love with the handsome and charming Dylan Maguire. He seems to be everything she is not: outgoing, unafraid, eager to experience life... seductive, protective... and mysterious. Vicki's Key is also a romance, filling requests from my fans to show more..

Vicki soon begins to realize that all is not what it seems at Aunt Laurel's home. And when the CIA comes calling with one more mission for her, she soon finds the haunted house with its deep, foreboding secrets is about to collide with her CIA assignment... in murder.

In coming weeks, find out who inspired the characters of Vicki Boyd, Dylan Maguire, and others...

What are you reading these days? What genre is it, and how it is attracting and keeping your attention?

Vicki's Key debuts as an eBook on February 1, 2012 and in trade paperback in March 2012. Advance orders for the printed edition are now being taken at www.pmterrell.com.
Posted by p.m.terrell