The Eyes Have It

How much does eye color have to do with the attractiveness of a person?

At the right side of this blog, you'll see a survey where I'm asking which eye color you'd most prefer to see a leading man or woman have. Just for the fun of it, we took the cover of my latest book, The White Devil of Dublin, and tried different eye colors.

The photograph is of a real man who lives in Nashville, Tennessee. It was taken in black and white: 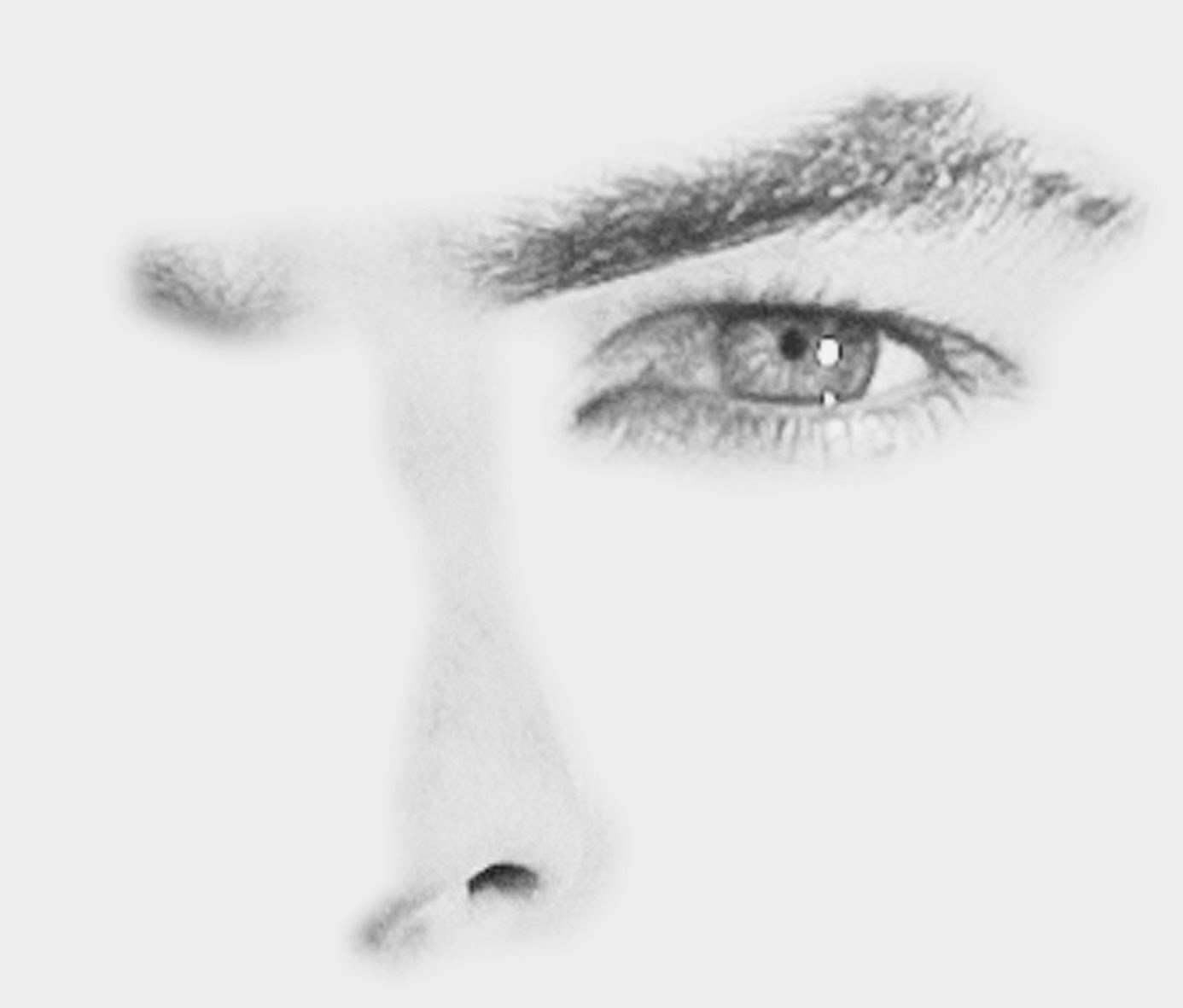 The eye color was changed to blue for the front cover of the book, because The White Devil has blue eyes: 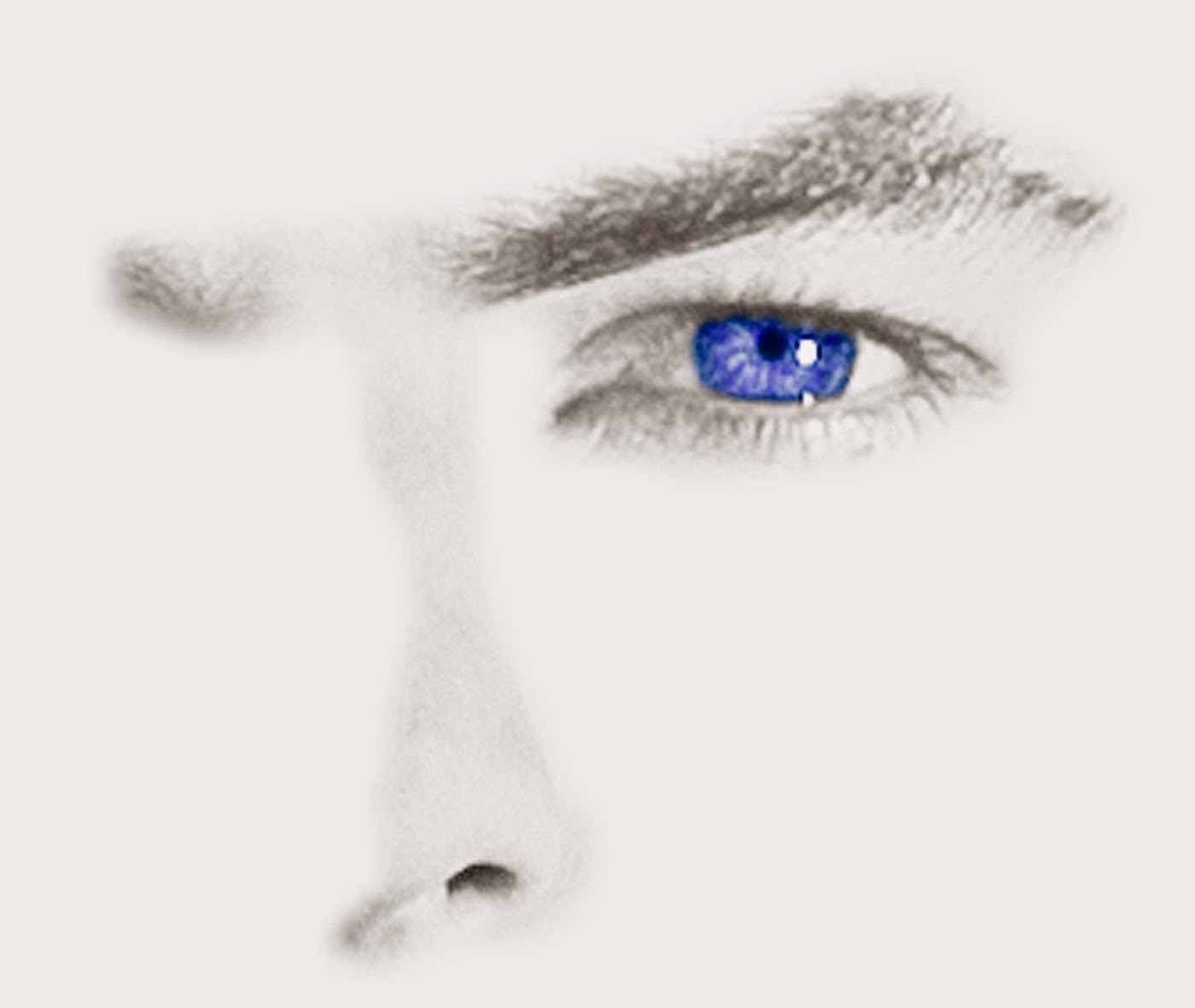 Here is the same photograph with green eyes: 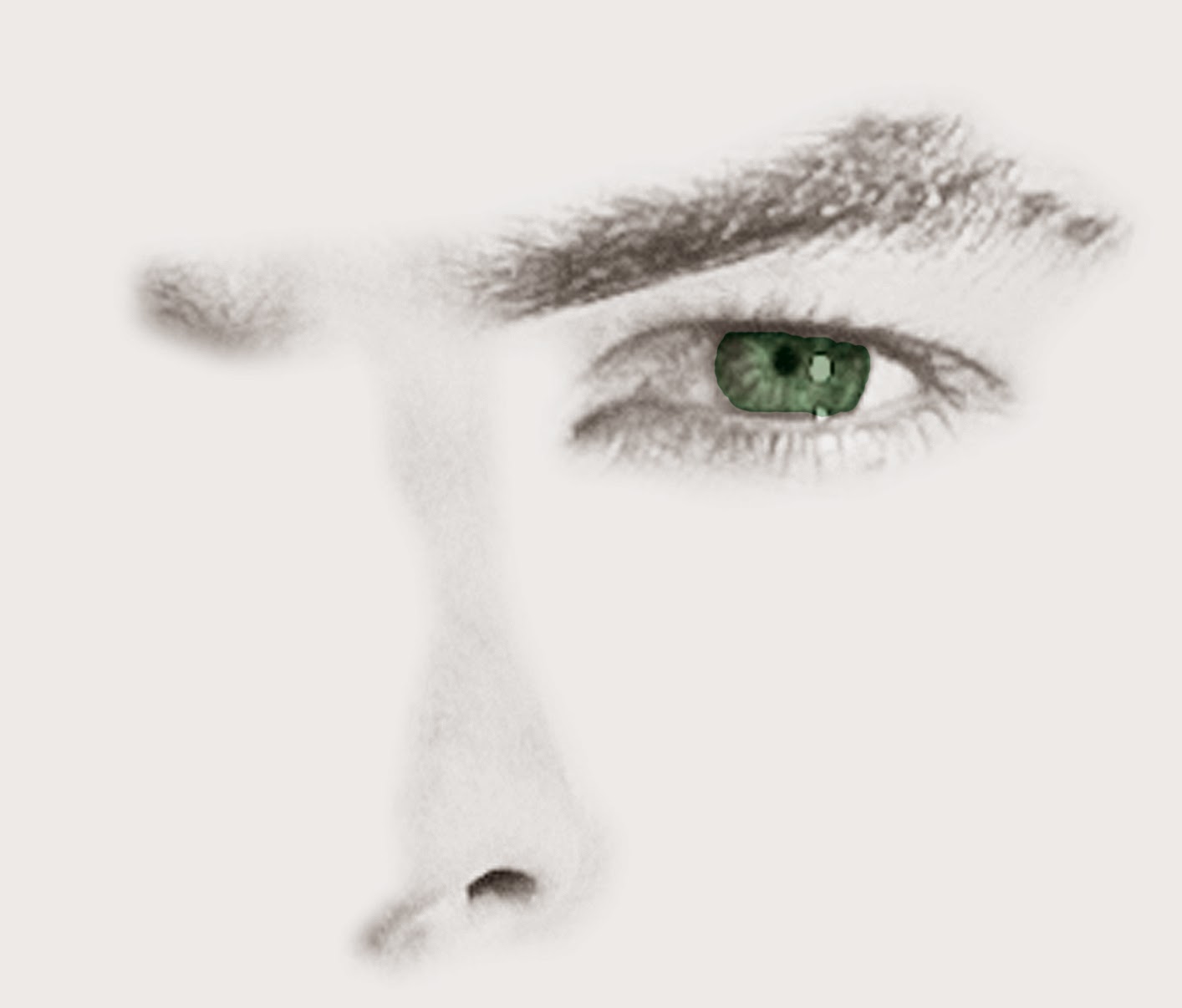 And here it is with brown eyes: 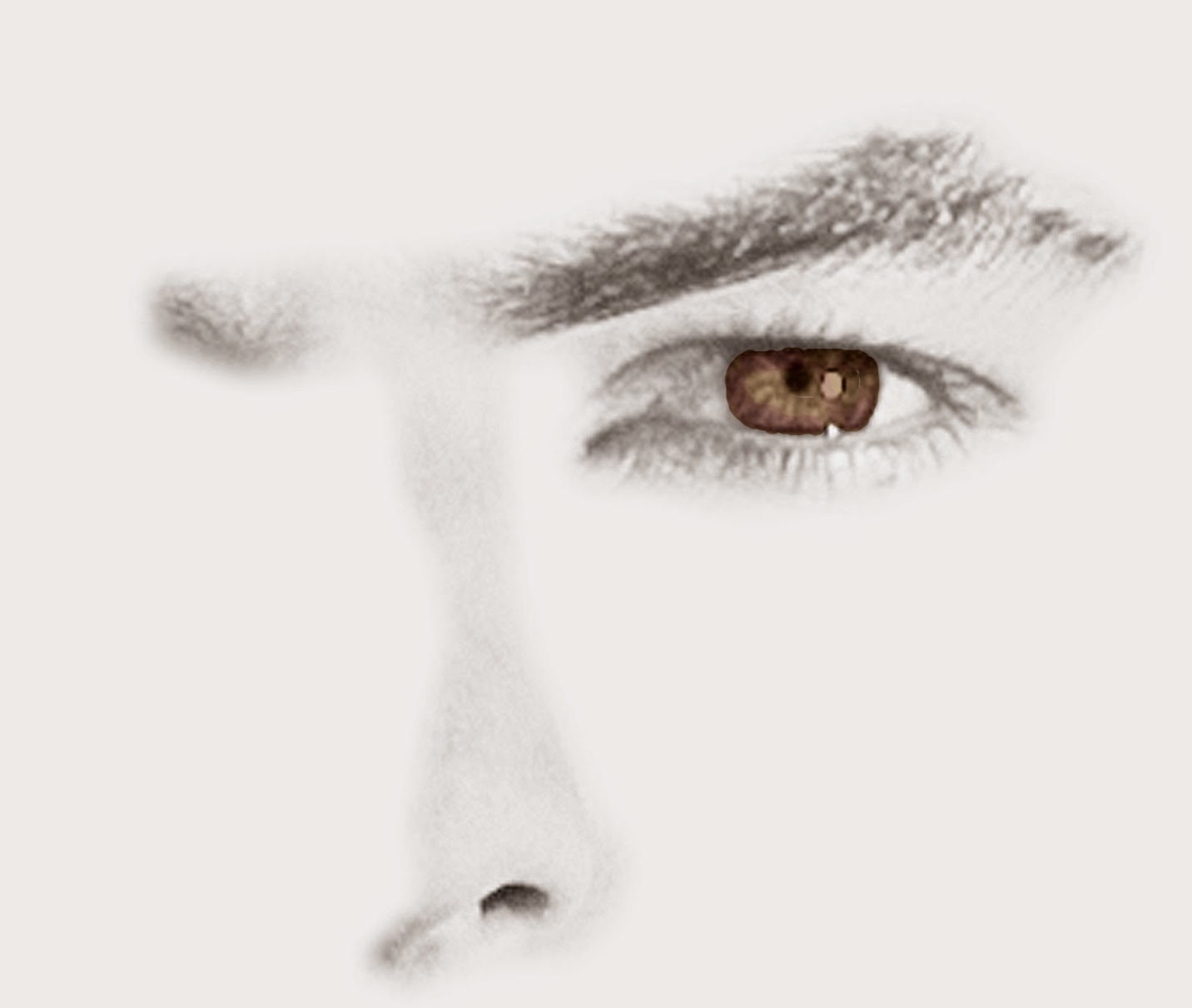 Which do you prefer?

For the record - the person who posed for this photograph has green eyes.

And to see The Seductive Stare, this is a terrific clip from BBC America's television series, The Musketeers (which I highly recommend!)

One of the toughest parts of a psychic spy's journey is learning how and when to stop the outside influences from permeating their psyches. It is similar to opening a door in which all manner of thoughts, actions, people and events will pour through. Without knowing when to close the door and how to get rid of all that excess clutter, a psychic can easily get burned out, become less effective or even resort to destructive behavior.

In some instances, psychic spies have turned to drugs or alcohol to mute the voices and turn off the images. There were even officially sanctioned experiments with drugs to determine their effectiveness. The end result, however, is the more drug-free and alcohol-free a psychic spy is, the more efficient and the more reliable they are in their missions.

For this reason, psychic spies undergo extensive testing - not only of their abilities but of their own hold on reality and their own sense of self.

Meditation has been proven extremely effective at keeping the psychics centered and for clearing their minds after a mission. 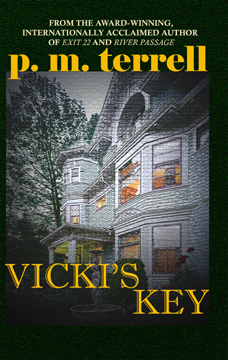 Physical activity has also proven effective, though the psychics must be careful because their sense of psychic "footing" and stability will be off-center following a mission. Something that would not be harmful, such as walking, is effective until they begin to feel more of a sense of reality. Something such as tennis would not be recommended because their reflexes don't match the level of their psychic activity.

Some psychics listen to classical music, watch movies or participate in a hobby - from stamp-collecting to sewing, from painting to bird-watching.

In Vicki's Key, Vicki is often very tired after a mission and requires sleep. This works well as long as the psychic "turns off" the psychic activity before sleeping; otherwise, they may continue to dream about the mission, its location and events. This occurs often with Vicki throughout the series, and she's begun to realize that her dreams should be taken as seriously as the mission during wakefulness.

In Vicki's Key, I mention some of the side effects of working psychic missions. Vicki witnessed a fellow psychic spy walking out of a building at Fort Bragg after a session, and he almost seems to be sleep-walking. She finds, also, that she requires sleep afterward, as the effort drains her energy.

The side effects were straight from real psychic spies' recollection of what it felt like to perform these missions or witness others doing them. Sleep-walking through the day seems to be a very common thread, as spies feel like they have one foot in one dimension and other foot barely in the physical present.

Here is an excerpt from Vicki's Key after her CIA boss, Sam, and a coworker drop her off a few blocks from her house after a mission to Afghanistan:


The van stopped at the corner of 13th and Walnut Streets as Sam slid the door open.

“You okay?” he asked as he stared at her intently.

“Of course I am,” Vicki replied, though she felt far from okay. As she climbed out of the van, she was almost angry with them for leaving her on the street like this. She knew, and they knew, that it was a common side effect for remote viewers to feel drugged after a session. Today was no exception. It felt intensified, she thought foggily, and she wondered if she was so out of practice that her sessions were throwing her body into a major turmoil. It was similar to awakening in the middle of a particularly vivid dream and feeling as if the dream was reality and her physical world was not. But when awakening, there was still the realization that she had been dreaming, whereas at the moment she felt as though she was still in the Hindu Kush. The little girl’s image was emblazoned in her mind, making her more tangible than Sam, who continued to stare at her or Julia, who, with a push of a button, was rolling down the passenger side window.

Regardless of Sam’s opinion, Vicki knew beyond a shadow of a doubt that the little girl had seen her. It didn’t make sense; even as dazed as she felt, she knew it was completely illogical. And yet she knew it was real.

Julia reached across the front seat and handed her a package through the open window. “You got this at Johnny’s hot dog stand,” she said. “The band playing in the Plaza at lunchtime was Black Pearl. They played Love Will Keep Us Alive and Blues is My Business and Business is Good. You sat next to the fountain on a brick wall and listened to them.”

Vicki nodded silently. The information was emblazoned on her mind as if she’d truly spent the afternoon next to the fountain’s mist. She could even hear the songs as they might have been played.

“Elm Street is two blocks over,” Julia continued. “That way.” She pointed to the west.

“Got it,” Vicki answered.

After what felt like a long pause but in reality might have been mere seconds, Sam slid the back door closed. She heard it latch as Julia returned to the driver’s side and the window was rolled up as if she was being dismissed. Vicki stood with her arms hanging limply by her side, watching in a stupor while the van pulled away from the curb and turned north on Walnut Street.

She remained there for a moment longer like a sleepwalker awakening, trying to get her bearings. Her lungs felt strained with the thick, humid air. As she struggled to return to the present, she wondered if the tightness in her chest was due to the coastal humidity of North Carolina or the rapid change from the thin air of the Hindu Kush. Then she shook her head in disbelief. She hadn’t really been there, she reminded herself. It was a dream. It was all a dream.

She strolled down Walnut Street. Her eyes began to focus on her surroundings and yet, even as she faced her reality, she knew it hadn’t really been a dream. It was as real as the beautiful yellow house with the hanging ferns on the front porch. In contrast to the starkness of the Hindu Kush, Lumberton was alive in a medley of colors. She felt like Dorothy closing her eyes in the black and white imagery of Kansas only to open them to the kaleidoscope of Oz. And yet, it didn’t mean that Kansas—or Afghanistan—had been a dream.

Other side effects that psychics have reported include:

the inability to focus on a conversation afterward;

not realizing that they've "zoned out";

not remembering where they were or what they did directly after a mission;

missing an important appointment or commitment, such as a school event for a child or a commitment with a spouse;

bumping into things, tripping over sidewalk curbs, stumbling or seeming to move as if drunk;

exhibiting physical ailments that are related to the body's struggle to reunite with the psyche, such as headaches, stomach upsets, muscle aches and pains;

or overlooking serious symptoms because the psychic self-diagnoses that the symptoms are part of their psychic mission.

Because of these side effects, each psychic mission also involves a handler; someone who not only witnesses the mission and makes certain it is audio-recorded, visually taped, or notes are taken, but someone who can keep an eye on the psychic until they have their bearings once again.

In July 2012, something happened in our solar system that could have thrown the entire planet back to the 18th century - and I bet you didn't even hear about it.

On July 23, 2012, a coronal mass ejection (CME) passed through the Earth's orbit. If it had occurred just one week earlier, it would have struck our planet - and been as potentially devastating as a massive asteroid.

A CME is the result of an extreme solar storm. In 2012, the CME was the worst recorded in more than 150 years.

Had it hit Planet Earth, it would have likely begun as solar flares that could have knocked out GPS (affecting planes, trains and automobiles, as well as cell phones and mobile devices) and also resulted in radio blackouts.

Anywhere from a few minutes to a few hours later, satellites would have been affected. Next, anything powered by an electric grid could have been fried. Even people living in certain areas of the world would have been unable to even flush a toilet, as many more modern toilets rely on electric pumps.

Had all of this occurred, we still would not have recovered - two years later.

Where did it hit? The storm cloud hit the STEREO-A spacecraft. It was the perfect place, because STEREO-A was ideally equipped to calculate everything in the debris field, providing scientists with more information than they'd ever been able to accumulate before. The spacecraft was not damaged because it was designed for use outside the protective Earth shield, so it was ideally suited for this catastrophe.