Yesterday, we showed you this picture: 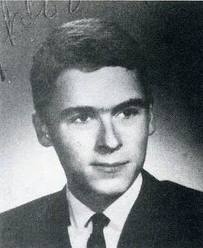 In real life, this is Ted Bundy, the infamous serial killer. 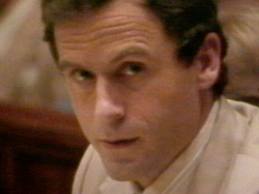 This young man romances you in high school. You part ways. Twenty years later, you reconnect. What has he become? What has he made of his life?

Is he a corporate executive? A Wall Street insider? A rock star, famous actor, or celebrity? Or has he opened a landscaping business, become a painter, a carpenter, a plumber? Is he someone you want to know better? Or would you run for the hills?

Tomorrow you will find out who he really is...
Posted by p.m.terrell

At a recent book talk, I was asked how I knew so much about breeding freshwater angelfish. In my latest book, Vicki's Key, Vicki Boyd takes a summer job helping an elderly woman with her angelfish breeding business. She arrives to find the woman has suffered a stroke and her Irish nephew is there to train Vicki how to care for and breed the angelfish. 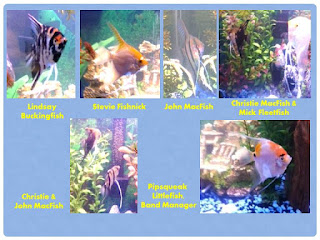 The information on fish breeding comes from experience.

I love freshwater angelfish. Contrary to what some books and pet store owners will tell you, they are very difficult to keep, primarily because they need special vitamins and they have a high mortality rate when they are young. But apparently conditions in my home are just right for them because every two weeks, I tend to get about 300 angelfish eggs laid.

Angels mate for life and they often live for ten years. In the video below, I have two pair of angels in one 70-gallon tank, along with some tetra to help provide them with a calm environment. The marble angel is a male named Lindsay Buckingfish. (I know. I name my angels. It's quirky.) The platinum angel in the right background is Stevie Fishnick. Stevie has just laid eggs on the filter and Lindsay is helping her guard them. The problem occurs when Pipsqueak Littlefish, the Band Manager (koi angel) wants to sample the sushi bar.

A close inspection of the fish afterward showed no damage to either of them. And today they are the best of friends, hanging out like guys do. The silver angelfish in the left side of the video, by the way, recently lost his mate, Christy McFish, a smoky leopard. I have a few more angels coming in this week so hopefully John McFish will find a new mate he can love and have eggs with.

In Vicki's Key, Vicki is a CIA operative who decides she wants to leave the agency and start anew. But after she moves Lumberton, North Carolina, her CIA boss finds her and convinces her to come back. Through the rest of the series, she will remain an angelfish breeder as a front for her real job as a CIA operative.

Why is she a fish breeder, you might ask? Because I needed to give her a job that sounds boring. It had to be something solitary; she couldn't work in a cubicle and leave in front of coworkers who might question her absences as she's pulled into missions. She works out of her home with a building in the back of the property that serves as the "fish house". As she's pulled into social settings, she can numb them quickly with talk of water parameters, which makes it unlikely for her vocation to be of much interest to anyone else.

So while the neighbors think she's living a totally boring life, she's actually experiencing quite a bit of drama, including murders, espionage and international intrigue.

p.m.terrell is an internationally acclaimed, award winning author. Her 13th book, Vicki's Key, was released in the spring of 2012 and is a nominee for both the 2012 International Book Awards and the 2012 USA Best Book Awards. Her 14th book, the sequel to Vicki's Key, will be released this fall. For more information, visit www.pmterrell.com.
Posted by p.m.terrell

Where Paranormal Is Normal...

Please visit me at Frankie Blooding's blogspot, ParaYourNormal, today! It's one of the most in-depth interviews I've had in awhile. You're sure to discover things about me and my latest book, Vicki's Key, that you didn't know before. I'd love to hear your comments and get your feedback!

The House That Inspired a Ghost

Readers outside of Lumberton, North Carolina might think that Aunt Laurel's aging, rambling home in Vicki's Key was entirely the stuff of fiction. But those who live here in the town where Vicki's Key is set know it was inspired by a real home... and real ghosts.

The Caldwell House was built at the turn of the 20th century and remained in the Caldwell family for three generations. It fell into disrepair when the last resident passed away and was eventually sold to a family in California. Unfortunately, it continued to deteriorate and remained vacant for several years. 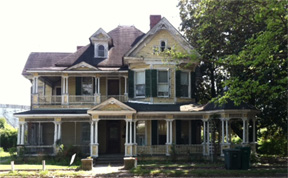 The lady who moved into the home for a short time reported hearing children's laughter on the second floor, even though no one was there in the house with her. She also reported taking her shoes off beside the bed each night, only to find they had been moved while she slept.

A local resident remembered driving past the house one dark and stormy night to see a person standing at the third floor window, watching him, although the house was empty at the time.

Others reported seeing a figure walk past the windows carrying an old-fashioned lantern that lit up the windows during the blackest of nights...

In Vicki's Key, when Vicki Boyd pulls up in front of the house to start her new job assisting the elderly woman who lives there, she is tempted to keep on driving - until the woman's charming Irish nephew, Dylan Maguire, talks her into staying.

But Vicki soon discovers Aunt Laurel has suffered a stroke and is confined to the third floor bedroom... And when the house starts to come alive with secrets long thought buried, Vicki questions her sanity - or is it something more that lurks there in the old, rambling home?

Vicki's Key is p.m.terrell's 13th published book. Released earlier this year, it is a nominee for the 2012 International Book Awards and the 2012 USA Best Book Award. It is the second book in the Black Swamp Mysteries series. The third, Secrets of a Dangerous Woman, is scheduled for release in the fall of 2012.
Posted by p.m.terrell

Fascination with a Culture

Two weeks ago, I spoke to a class of Asian Studies students at the University of North Carolina. I became intrigued with how their instructor had immersed herself in Asian culture, including having lived in both Japan and China. She spoke both languages as fluently as she speaks English, and clearly loved the Asian countries.

A couple of months ago, I met a reporter who had the same fascination. She had traveled extensively in Thailand for more than two straight years.

And my sister has traveled extensively in Africa with her job and loves the cultures she finds there.

I suppose it's no secret that I love Ireland. It began when I was researching the Mary Neely story and realized my ancestors had been traced back to Ireland and then to the Vikings. It was further enhanced when my cousin told me there was a Neely family reunion in Ireland every year (my maiden name). The more I learned about the country, the more I thought of it as home, as if it was something passed down in my DNA.

Is there a country or a culture that you feel drawn to? What country/culture is it, and what draws you to it?

p.m.terrell is the award-winning, internationally acclaimed author of 13 published books. Her latest, Vicki's Key, introduced an Irish character. Her next book, Secrets of a Dangerous Woman, is the next in the series and will be released in the fall of 2012. Find out more about her writing at www.pmterrell.com.

Write What You Know... Or Not

The advice "write what you know" has been handed down for generations. But in reality, how many writers stick to that advice?

I write suspense/thrillers, which includes at least one murder (and usually more) in each book. They've been shot, stabbed, poisoned, their deaths made to look like accidents... But I've never actually DONE any of those crimes. I research quite a bit, looking at police reports, real crime scene data, and talk to experts (usually on the right side of the law.) But I'd never dream of actually shooting someone as research for my murder scene. 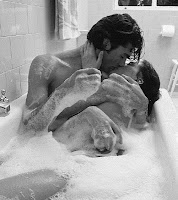 Vicki's Key has more romance in it than any of my previous work. It didn't just happen; it was by design. My readers had been clamoring for more romance for several years and I finally gave it to them in a new series, Black Swamp Mysteries, that is designed to be edgier and sexier.

But I have to admit, I was surprised when people began commenting about the research I must have done for the love scenes. I didn't know quite how to respond to that. I've never made love in an open field next to a pond in Ireland but by golly, there's a scene in one of my upcoming books that does just that.