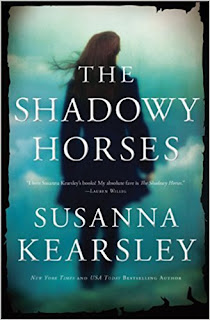 In The Shadowy Horses by Susanna Kearsley, archeologist Verity Grey begins an excavation in Scotland. The Ninth Roman Legion was rumored to have camped there as they marched north from York to fight the Scots, and the owner of a remote manor house is convinced his property contains the bones of the lost legion.


From the first night in the manor house, Verity hears the horses thundering across the fields beneath her window, whinnying and snorting as their hooves pound the ground. Yet when she begins her first day of work, she discovers there are no horses within miles around.


The cook’s son has paranormal gifts that Verity vainly attempts to logically explain away. He sees the ghost of a Roman sentinel walking through the fields. Verity reminds him of his sister, so the phantom is determined to remain near her, watching over her and protecting her—which factors into the climactic scenes. The cook’s son also sees things before they happen and occasionally is consumed by other unseen presences.


As Verity begins the excavation work, she is joined by others including a handsome Scot named David so in addition to the ghost and the work, she finds herself caught up in romance.


I have loved every Susanna Kearsley book I’ve read. Her beautiful style reminds me of books I read while growing up; a modern-day Daphne du Maurier or Mary Stewart. The characters are complex, revealing themselves one layer at a time. The setting is described so exquisitely that I could smell the heather in the fields, the rain moving in, the fish market in the village. I could hear the shadowy horses thundering through the fields, I could feel the ghostly presence of one that can never leave his last encampment. Reading any of Kearsley’s books is truly an immersive experience.


There is a twist at the end that I didn’t see coming but in retrospect, all the clues were there, cleverly hidden in plain sight.


I definitely give this book five stars and I’m anxious to read another of Kearsley’s books as quickly as possible. They are addictive.

Watch the Book Tuber Video below:

In Geography Lies Your Destiny

I have often heard the phrase “geography is destiny”. Originally a geopolitical theory that refers to certain geographic regions that carry strategic advantage, it can also be applied to the way your life unfolds, the opportunities open to you and ultimately to what you are able to achieve in life. This philosophy was brilliantly portrayed in the 2017 neo-Western murder mystery movie inspired by a true story, Wind River, starring Jeremy Renner and Elizabeth Olsen.

The story takes place on the Wind River Indian Reservation in Wyoming in the middle of winter. It is an inhospitable place, isolated from the rest of the world in a winter wonderland that can turn vicious in an instant. Early in the movie we learn the atmosphere becomes so cold that the air in the lungs can actually crystallize, leading to death. When expert tracker and U.S. Fish and Wildlife Agent Cory Lambert (played by Jeremy Renner) discovers a young woman’s body six miles from the nearest structure, he recognizes the telltale signs of pulmonary hemorrhage. The question is why she was so far from anything; tracing her footsteps, he comes to the conclusion she had been running for six miles—barefoot on ice and snow.


The Wind River Indian Reservation is a place forgotten by modern man, though it encompasses over 3,000 square miles as well as 3,500 square miles of water. It is the home of just over 26,000 Eastern Shoshone and Northern Arapaho Native Americans, descendants of people pushed onto the reservation from their original territory beginning in 1868, some 30 years after the Cherokee were relocated along the Trail of Tears to Oklahoma.


The Reservation has only a handful of people on their police force and because the FBI has jurisdiction on federal property, an agent is called in from Las Vegas when the coroner confirms the victim had been sexually assaulted. Jane Banner, played by Elizabeth Olsen, is unfamiliar with the unforgiving landscape and relies on Cory Lambert to assist her in the investigation.

The landscape itself becomes an antagonist. Regardless of the temperature in the room, you will find yourself shivering and reaching for an extra throw or blanket. The fact that Native Americans were forced to live there—and they survived—is a testament to the ability of human beings to adapt. Opportunities there are nearly non-existent; in one scene, a young man is asked why he didn’t get out when he might have been able to escape the poverty, high crime and hopelessness. One gets the sense that because these people have lived there for generations, sometimes the land itself prevents them from straying far, regardless of the opportunities that might be available to them elsewhere. It is as if their feet have roots grown deep into the frozen ground, fusing them forever to that place and time. 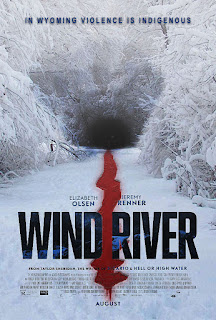 I admit I closed my eyes during a scene toward the end of the movie, where we learn in a flashback what occurred to the young woman and how she came to be outside in her bare feet, running for her life for six miles over ice and snow that would have stopped an average human being in their tracks long before it stopped her. By this time, the haunting landscape and the plight of its people had pervaded my spirit and long after the movie was over, I felt as if I was still there.


Missing person statistics exist for every demographic except Native American women. The life expectancy on the Wind River Indian Reservation is only 49 years and unemployment rates are more than 80%. (Bustle,2017) Though missing person statistics are not kept, Native American women are 10 times more likely to be murdered than other groups and experience rape and sexual assault at 4 times the national average. (NewYork Times, 2012)


If geography determines our destiny, it is difficult to fathom why anyone would remain in a place that appears destined to kill them—perhaps the original intent when these tribes were forced from their original territories. And yet it happens all across the globe. The invisible system that anchors us remain so strong that it is often difficult—if not impossible—to break free.

The Adventures of Blade and Rye 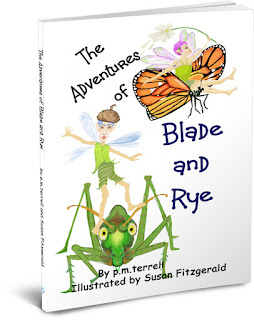 For nearly 20 years I have written suspense novels and historical suspense, so it may come as a surprise—to you and to me—that I have written my first children’s book, The Adventures of Blade and Rye.


Written for children ages 10 and under, The Adventures of Blade and Rye is written as a lyrical poem similar to the style I loved when I was a small child and listened to my mother reading The Cat in the Hat or The Night Before Christmas. The first things I memorized were stanzas from those book pages, and they instilled in me a love and appreciation for poetry.


The book is about two tiny fairies named Blade and Rye and their adventures when they discover Planet Earth. They fall in love with the Blue Planet and beg their teacher, Miss Indigo, to remain there to witness all the exciting things that occur in nature. They must find the perfect home, which takes them from mountain peaks to ocean depths. When they discover just the right spot, they are turned into two tiny blades of grass to keep them safe from wandering into danger. And there under the protective arms of a yew tree beside an idyllic lake, they bask in the sunshine, witness the moon’s appearance and discover life underground.


I have always loved angels and fairies and as I have researched my Scots-Irish ancestry, the love and appreciation for these wee creatures have only grown.


The official release date is November 22, 2018. Until then, pre-orders can be placed with local bookstores for the paperback edition, which retails for $11.99. The Kindle version is also available for pre-order at $4.99, and amazon has jumped the gun and is selling the paperback prior to the official release date. The book is 44 pages and full color inside and out, illustrated beautifully by Susan Fitzgerald, who truly makes Blade and Rye come to life.