As 2017 draws to a close, it’s natural that we all should be looking at the upcoming year and all the promises it holds. Nearly everyone I know has experienced more stress in 2016 and 2017, largely due to world events, and I for one am looking forward to a more relaxing and positive 2018.


I am currently working on three books to be released in 2018:


The Essential Marketing Plan for Authors is based on my popular 52-week Marketing Plan Course through The Novel Business. I’ve been mentoring authors for nearly 18 years and have found the biggest challenge to be in the area of marketing; too many authors give up too quickly or they don’t take the time or make the effort to correctly identify their target market, so their efforts miss the mark. This book takes the author through the entire process of identifying their ideal reader (even when they don’t have a clue who they are) and walks them through digital promotional efforts as well as traditional marketing. I am in the editing stage now, and hope this book will be released before the summer of 2018.


The Adventures of Blade and Rye is a venture into writing children’s books (preschool through 3rd grade). I actually wrote this book about three years ago and set it aside, but was recently inspired by Sandra Warren and her children’s book, Spivey’s Web to revive it. Blade and Rye are two fairies and best friends that visit Earth just as life is forming. Their teacher transforms them into two blades of grass so they have a front-row, center seat beside a lake that will see everything from dinosaurs to humans, and eventually (through the series) the formation of villages and then high-rise cities. It is in the production stage now, and I also hope this will be released before the summer of 2018. 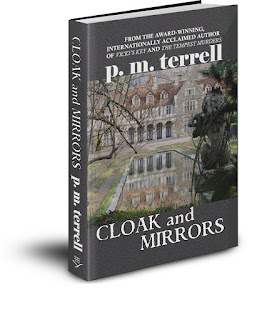 And for those that love Vicki Boyd and Dylan Maguire, I am in the writing stage (first draft) of the 7th book in the Black Swamp Mysteries Series. Cloak and Mirrors ended with Dylan and Vicki going dark to avoid enemy spies from abducting Vicki and taking her to Moscow. They will find themselves on a sparsely-populated island as a hurricane nears. Cut off from the mainland, they find refuge in an ancient monastery along with half a dozen island residents, and as darkness descends one after another are murdered. It is up to Vicki and Dylan to discover the killer and his or her motives. It is due on the editor’s desk in the spring so hopefully it will be released in the fall of 2018—just in time for Book ‘Em North Carolina’s 7th Annual Writers Conference and Book Fair.


Book ‘Em is now under the leadership of Robeson Community College and I have returned this year to assist the organizing committee. Please mark your calendar for Saturday, September 22, when we’ll bring together dozens of authors that will be signing and selling their books, giving talks and participating in panel discussions. Headliners are New York Times bestselling authors Jeff Mudgett, Jonas Saul and Elizabeth Massie.


What are you reading?

Email ThisBlogThis!Share to TwitterShare to FacebookShare to Pinterest
Labels: writing

It’s officially eBook season, that time of year when eReaders are purchased for the holidays and recipients are eagerly looking forward to the experience of reading on their new devices. Here are my favorites from 2017 and a sneak peek into some of the books I’ll be reading in 2018: 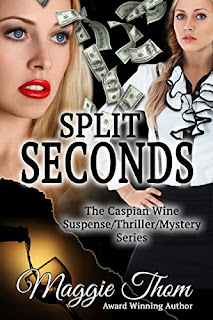 1.     Split Seconds by Maggie Thom, the third book in the Caspian Wine Series, just proves that Thom keeps getting better and better. The suspense begins immediately, spiriting us across Canada and introducing us to a myriad of characters with so many levels and facets that we’re left guessing who we can really trust. The mystery deepens at every turn and the book sports two climactic scenes, each of which will leave you breathless. 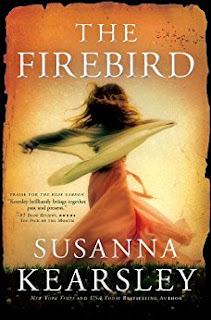 2.     The Firebird by Susanna Kearsley takes us back in time and across Europe as we discover the abilities of a woman that can hold an object and know its past. We are taken from London to Scotland and then to St. Petersburg under the reign of Catherine. It is a fascinating glimpse into how and why St. Petersburg was built and has interested me in touring the city. It also delves into psychometry and telepathy with such realism that it truly is riveting. There are two main characters—a woman in current times as well as another living 200 years in the past. 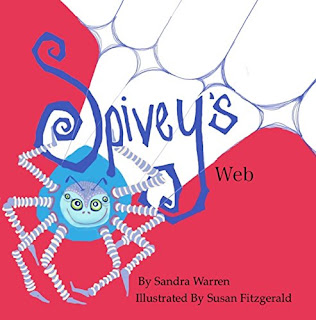 3.     Spivey’s Web by Sandra Warren and illustrated by Susan Fitzgerald is a lovely children’s book intended for the preschool audience. I have serious arachnophobia but couldn’t help but admire Spivey the barn spider’s beautiful web spinning—and the brilliant light that shines through it to calm a baby in a manger. 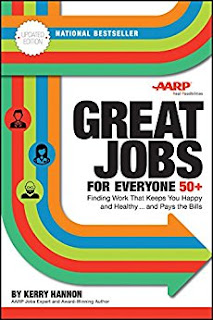 4.     Great Jobs for Everyone 50+ by Kerry Hannon and published by AARP contains terrific advice even for job hunters under the age of 50, such as considering three types of resumes and how to get past employers’ computerized black hole of resume accumulation. The days of retiring at 65 to sit on the front porch and play chess are long gone while the technological world is progressing at a rate never before experienced and people are now working well into their 70’s and beyond. 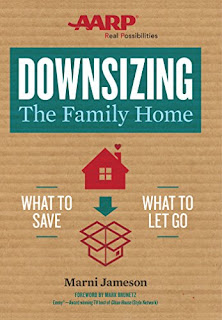 5.     Downsizing the Family Home by Marni Jameson and also published by AARP is a terrific book originally meant for cleaning out a parent’s home after they’ve left it, but it’s also a valuable resource for anyone wishing to rid themselves of clutter. Only 17% of us take the time to look at the things we’ve accumulated through the eyes of heirs, and it’s definitely an eye-opener. Some tidbits: more than 50K books can be stored on an eReader; all those pictures from our youths can be scanned and maintained electronically; and music can be stored electronically now as well. Scaling back doesn’t mean getting rid of the things we love but learning how we can have it all with a smaller footprint. 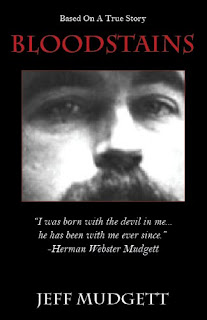 1.     Bloodstains by Jeff Mudgett is an intriguing look at Jeff’s search for his ancestry, revealing the fact that his ancestor, Herman Webster Mudgett (better known as H. H. Holmes) was America’s first serial killer. As Jeff delves deeper into his ancestor’s sinister and terrifying past, he becomes afflicted with what is known as the Holmes Curse, first reported by the New York Times in the 1890s: a form of seizure that occurs whenever the alien voice in his head is disobeyed. His search for his ancestry quickly turns into the struggle to survive. New York Times bestselling author Jeff Mudgett is also one of the headliners at the 2018 Book ‘Em North Carolina Writers Conference and Book Fair, a free event to raise awareness of the link between high crime rates and high rates of illiteracy. 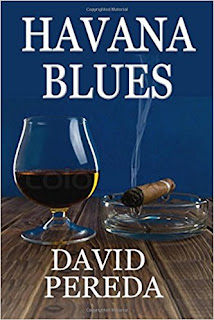 2.     Havana Blues by David Pereda will be released on Kindle in 2018, transporting us to 1952 and the eve of the Cuban Revolution. It is a coming-of-age story for young Ramon Rodriguez against the backdrop of Cuban history, including the prosperity under President Carlos Prio Socarras, the coup staged by CIA-backed General Fulgencio Batista and ultimately another coup by Fidel Castro that transforms Cuba. 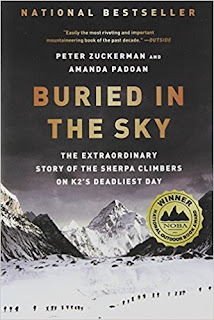 3.     Buried in the Sky by Peter Zuckerman and Amanda Padoan is the true story of the Sherpas that make mountain climbing possible on ice-covered K2, including the deadliest day for Sherpas on the mountain which occurred during the 2008 climbing season. I am a huge fan of Into Thin Air by Jon Krakauer about the deadly Everest expedition of 1996, and I’m looking forward to reading this one, which takes me to K2, the second highest peak—and by far the most dangerous and deadliest. 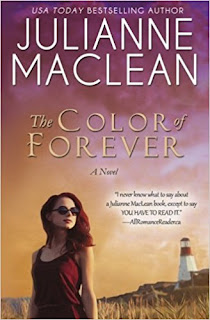 4.     The Color of Forever by Julianne MacLean is the 10th book in the Color of Heaven Series, in which average people are affected by real life magic that transforms their lives. This book takes us to a sea village along the jagged coast of Maine and to an eerie, historic inn that holds deadly secrets of the past. 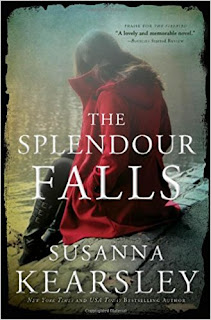 5.     The Splendour Falls by Susanna Kearsley takes me to one of my favorite settings: an ancient castle and a tragic love. This castle is in France during the German occupation of World War II, combining the same blend of history, mystery and romance that Kearsley is known for.


What are you reading?