I just finished reading Mary Stewart’s book, Wildfire at Midnight. The book was originally published in 1956 and was re-released in 2011. Reading it was such a pleasure that it reminded me why Stewart’s books landed on the New York Times and other bestseller lists multiple times, and why many consider her to be the founder of the romantic mystery genre. My review is contained in the video below, or you can skip the video and read the review beneath it.

Mary Stewart was born in England but she died in Scotland, and her knowledge of the Highlands—and particularly of Skye, the book’s setting—is apparent. I do not fish and I have never climbed and never thought I would be interested in the details of either sport, though books on Mount Everest are among my favorites. In Wildfire at Midnight, the heroine—Gianetta or more commonly called Janet—is much the same. In need of a break from her job, she heads to a resort on Skye and runs right into her ex-husband Nicholas. Determined to remain there and enjoy her time anyway, she is soon caught up in the tension at the resort—a tension, it turns out, to have been brought about by a ritual murder on the mountain. It is a murder in which the resort’s guests are each suspect—all except Janet, who arrived after it had taken place. 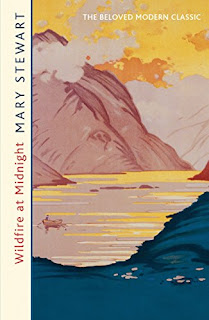 We meet a wide range of characters, from cheating husbands to unhappy wives and when two women become lost on the mountain, the suspense ratchets up. One is found dead after her rope had been cut and the other nearly dead several days later. Now unconscious, Roberta cannot tell the authorities who the murderer is, and the killer makes an attempt on her again. Then another guest is found murdered, his throat slit—and our heroine, wishing for a quiet afternoon fishing, winds up in a fight for survival.


The action is fast, the words concise. Though it was written in the 1950’s, the heroine is surprisingly independent and quite capable of standing up for herself. After her divorce, she returns to a very successful modeling career and has become somewhat of a celebrity—though in the end, in typical 1950’s fashion, the book turns to a woman-in-jeopardy with a romantic ending.


There are twists and turns in this book, each time causing me to question which of the resort guests could be the killer—and it isn’t limited only to the men. Amid the suspense are the sweeping vistas of the mountains, the varying experience of the climbers, both the serenity and the dangers of a land that is so enticing and yet so unforgiving.


Mary Stewart wrote around 17 romantic suspense novels in addition to books in four other genres. If you haven’t read any of them, Wildfire at Midnight is a great place to start.

A Wee Murder in my Shop 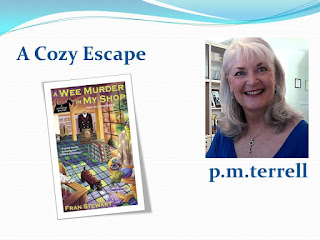 I’d like to tell you about a book I just read by Fran Stewart called A Wee Murder in my Shop. For the past few years there has been a constant slate of hard-hitting news stories and sometimes it’s necessary to escape into a different type of drama, one that is far removed from current world events, and A Wee Murder in My Shop is just the ticket. Watch the video below or at https://youtu.be/FRDyIhvZo9o or skip below the video to read the review.

I knew I had to read this book when the author told me that she was inspired to write it by R. A. Dick’s classic, The Ghost and Mrs. Muir. That is one of my all-time favorites, but I always wished that Lucy Muir and Captain Gregg had been able to remain together and form a deeper relationship. This book reminds me a lot of that but it also brings us up to date with a more modern and independent protagonist, Peggy Winn. 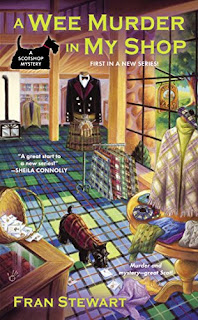 Instead of inheriting a ghost with a house as Lucy Muir did, Peggy gets the ghost when she purchases a Scottish shawl that turns out to be roughly 700 years old. And while the ghost is also that age, he's frozen in time as a virile 30-something who is still deeply in love with the woman who first owned the shawl. Now that the shawl has somehow been resurrected after all those centuries, the ghost Peggy nicknames Dirk remains with it as if tethered to it, following Peggy across the Atlantic to Vermont where she owns a gift shop called The ScotShop.

Soon Peggy and Dirk are pulled into a murder mystery. The victim is none other than Peggy's ex-boyfriend and the crime scene is smack dab in the middle of Peggy's stop. We are introduced to a cast of memorable characters, some of whom seem to have secrets, and we’re left guessing who killed Mason, why, and above all, why he was killed in her shop in the dead of night. The investigator is a modern day love throb, Harper, and I found myself caught between wishing for a magical relationship with Dirk or a more realistic love affair with Harper.

The author reeled me in and I could visualize the quaint Vermont village with its Scottish theme, rows of gift shops and cozy restaurants and steady stream of tourists—so much so, that I wish I knew if there was truly a village the place was based on so I could visit. There are ample clues and red herrings throughout the book, including some twists that take us into the distant past, all woven together so expertly that I really didn't know how the story was going to end.


The book is truly entertaining and a fun read and escape. We don’t learn exactly why Dirk is tethered to the shawl, which turns out to be fine because this is only the first in the ScotShop Mystery Series. I was very happy to discover that Peggy, her ghost and her new love interest have all been set up nicely for the sequel. It’s rather like wrapping up some details in a television series but leaving us with a cliffhanger so we’re eagerly looking forward to the next installment, and in fact, I can definitely see this series made into a television series complete with the strong, independent woman, the sexy detective and the very sexy Scottish ghost. I highly recommend A Wee Murder in my Shop by Fran Stewart.

Visit my YouTube channel at https://www.youtube.com/user/terrellpm for more book reviews or visit my website at http://pmterrell.com/ for book trailers, the inside story of my writing as well as other authors, excerpts from my books and much more.