The Launch of A Thin Slice of Heaven

May 1 was the official launch for my 19th book release, A Thin Slice of Heaven. 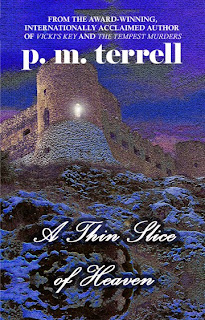 She had arranged to meet her husband in Northern Ireland for a second honeymoon, but when Charleigh arrives at the remote castle, she receives a message that he won’t be coming—and that he’s leaving her for another woman. Stranded for the weekend by a snowstorm that has blocked all access to the castle, she finds herself three thousand miles from home in a country she knows nothing about.

She is soon joined by Sean Bracken, the great-grandson of Laird Bracken, the original owner of the castle, and she finds herself falling quickly and madly in love with him. There’s just one problem: he’s dead.

As the castle begins to come alive with secrets from centuries past, she finds herself trapped between parallel worlds. Caught up in a mass haunting, she can no longer recognize the line between the living and the dead. Now she’s discovering that her appearance there wasn’t by accident—and is more sinister than she ever suspected.

The inspiration for A Thin Slice of Heaven came from two books: What Dreams May Come and The Ghost and Mrs. Muir.

Years ago, I read What Dreams May Come by Richard Matheson. It was a book unlike any other I’d ever read. It is the story of a couple in love; their lives together cut short by the sudden death of the husband. But that is where the story begins, as we are led through the veil to another realm. The concept has fascinated me for years and I particularly find it intriguing when I discover a story from a child who remembers past lives and things they could never have known—or those who encountered near death experiences and returned to tell fantastic stories of the other side.

I also love The Ghost and Mrs. Muir by R.A. Dick. Though it is a short story, it brings to life a home on the coast of England that is haunted by its original owner, a sea captain. However, there were two things that made the book (and subsequent movie) feel incomplete to me: first, when Mrs. Muir turns to another romantic interest, and second, that her relationship with the captain did not go far enough.

It left me wondering what if? What if it was possible to transcend the veil between the living and the dead, and have a relationship with a spirit that was as real as two humans? What if, despite the fact that the man had died a hundred and fifty years prior, it became the most satisfying and loving relationship one could imagine?

I am a stickler for research so of course I began researching spirit sightings and why some remain on earth to haunt their old homes despite the centuries that follow.

I also researched the three stages of dying, which had originally been told to me by hospice personnel when a dear friend was passing. I placed it all together into this romantic suspense: a living being in more need of romance than even she could realize; a spirit able to pull her beyond the veil; a mass haunting reconstructing a battle that killed and wounded many; and a love that transcends through time itself.

A recent survey cited that 91% of all people believe in ghosts. Do you? Leave a comment and let me know! 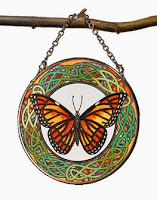 I will be giving away a beautiful Celtic suncatcher, which I describe in A Thin Slice of Heaven. The metamorphosis of the butterfly coupled with the endless cycle of life depicted by the Celtic design around the butterfly, are central themes of my book.

For a chance to win this suncatcher, all you need to do is follow my tour and comment. The more times you comment, the better your chances of winning!

Here's a list of the tour stops scheduled through the end of this month: