In Search of Ireland's Soul

Last week I profiled Dublin, places to go and things to see if you've never visited the city before. Dublin is the best place to start because it explains so much of the nation's history, especially one of it's more recent defining moments: the Easter Rising, which led to Irish independence.

Northern Ireland and the Republic of Ireland share an island that is slightly larger than West Virginia and slightly smaller than Indiana. A few things to note when traveling between the two:

1. There is a tremendous amount of cooperation between the two governments, resulting in (among other things) buses that freely travel from one to the other.

2. There is no "Checkpoint Charlie"; even if you choose to rent a car and drive, there are no passport checks or customs officials between the two countries.

That said, I found the soul of Ireland in a picturesque village in Northern Ireland. In earlier blogs, I told of my sister's discovery of Ballygawley in County Tyrone as a village in which our ancestors once lived, which led us both to this idyllic place. It is easy to reach from Dublin or Belfast and if you're interested in the Irish village told in literary works, this is the place to visit.

1. Getting There. Bus Eireann runs daily from Dublin to Ballygawley. The bus station is located at Store Street in Dublin and it's a short taxi ride from most hotels, and it's only 1.33 miles from Dublin's City Centre. Ireland has a fabulous bus system that is comfortable, up-to-date and efficient. You even have Wifi access on the bus. You can see the entire schedule here (http://www.buseireann.ie/pdf/1360752941-032.pdf). I paid 18 Euro for a one-way ticket, which was well worth it.

2. Arriving in Ballygawley. The Ballygawley stop is a Park-and-Ride with a covered stop. When you get off the bus, the driver will direct you toward the village, which is just a short walk away. 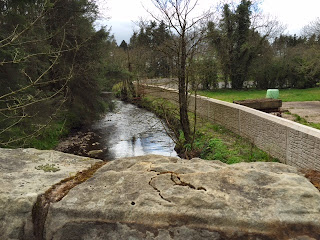 Once you cross the traffic circle, you'll wander over a stone bridge with a babbling brook (shown above) before reaching the village proper. You'll instantly feel as though you've been transported into another world. You won't find crowds or a carnival atmosphere here. Instead, you'll find hospitality, a slower pace and easy access to many of the island's best tourist attractions.

3. Where to Stay. The best place to stay is The Tailor's House (www.eatsdrinksfortywinks.com) at 50 Main Street, right in the heart of the village. Formerly Askin's, it was once a tailor's house now owned and managed by Emmett, Mary and Leo Quinn.This is a fabulous Bed & Breakfast; it has only a few rooms, so be sure to book far in advance. Each room has a private, modern bath. The flat screen televisions broadcast stations from throughout the United Kingdom, including London. The beds are extra comfortable. The view from in front of The Tailor's House is shown below. 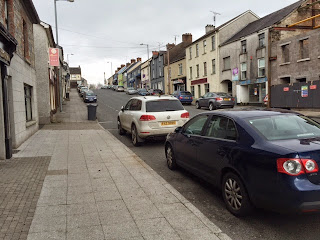 The Tailor's House Restaurant downstairs has the best food and service that I experienced anywhere in Ireland or Northern Ireland. The meat is delivered daily from the butcher shop across the street (owned by Declin Quinn) and is the freshest meat I ever tasted. (Shown below.) 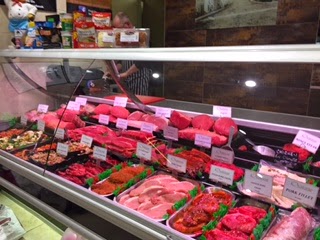 The vegetables are delectable, and the desserts are to die for. If you travel away from Ballygawley during the day, be sure to eat light so you'll be hungry when you return, because you'll definitely want dinner and dessert here.

Shown below: The chicken dish was a special of the day; the chicken was incredibly tender with an amazing sauce over champ (mashed) potatoes with tender broccoli. In the background is Steak & Guinness, with tender beef that will melt in your mouth and a wonderful sauce made with - you guessed it - Guinness. 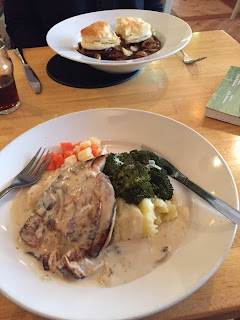 The dessert shown below was a flavorful apple dessert that came with whipped creme (obviously homemade, it was that good) and a personal pitcher of an amazing sweet sauce. 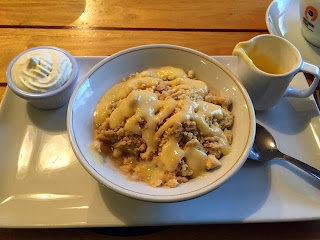 Breakfast is included with the room, and you will not want to miss Mary Quinn's scrumptious cooking! Fresh eggs from the farm, incredible sausages and bacon from the butcher shop across the street (owned by Mary's son) and whipped up by a talented chef.

Beside the restaurant is The Tailor's House Bar, which is a wonderful place to relax. The entire facility has free Wifi, and we found the Bar to be a great place to check emails at the end of the day, and just soak up the Irish culture. It is shown in the video below.

By far, the best part of staying at The Tailor's House are the owners and staff. Owned by Emmett Quinn and operated by Emmett and his parents, Mary and Leo Quinn, their hospitality, friendliness and helpfulness are beyond compare. You'll feel like a member of the family.

Ask to see the picture of the Quinn family with one of their more famous guests, Bill Clinton, while you're there.

4. The Ulster American Folk Park and Museum is one place you won't want to miss, and it's close to Ballygawley. It consists of a wonderful museum and research facility where you can look up Irish ancestors, and acres upon acres of beautiful trails leading to authentic and reproductions of a variety of buildings (one is shown below). 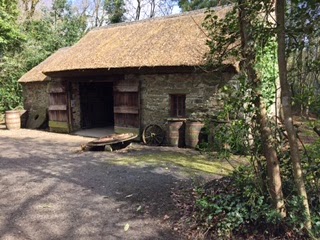 The facility focuses on the Irish exodus, particularly during the two potato famines (known as The Hungers in Ireland) and the link between Ireland and the United States. There are, at the time of this writing, approximately 34 million Americans of Irish descent. Learn all about this wonderful place here: http://www.nmni.com/uafp


5. The Mid-Way Point. Ballygawley is midway between Londonderry/Derry to the west (https://www.discovernorthernireland.com/walledcity/), and Belfast to the east. You can reach either place through Northern Ireland's Translink (http://www.translink.co.uk/) This bus service, like Bus Eireann, is modern, efficient and pleasant. Next week I'll profile things to do in Belfast, including visiting the Titanic Museum, touring the Peace Walls from The Troubles, and taking a day-trip that leaves from Belfast to travel over the Causeway Coastal Route (www.causewaycoastalroute.com) and the Giant's Causeway (http://www.nationaltrust.org.uk/giants-causeway/).

6. The Black Cat Restaurant. One more thing you'll want to do while in Ballygawley is dine at The Black Cat Restaurant at 32 Dungannon Road, just about half a mile from the village of Ballygawley. Overlooking Martray Lake, the picturesque beauty will both soothe and captivate you. The chef is world renowned, and was the victor of the Battle of the TV Chefs. Read all the details about that fun series and Chef James' win here: http://ulsterherald.com/2014/07/09/michael-devlin-visits-the-black-cat-restaurant-for-the-finale-of-battle-of-the-tv-chefs/

Here's the view from the restaurant below:

Coming up next week: what to do in Belfast.

If you have traveled to County Tyrone, Northern Ireland, and you'd like to recommend things to do and places to go, feel free to leave a comment below!