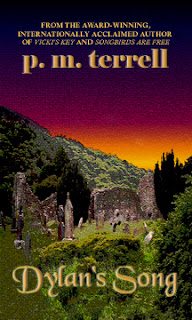 Dylan's Song has been released in eBook format - and will be released in paperback on St Patrick's Day, March 17, 2013.

This is one of my favorite books because the action takes place in Ireland. I have always loved reading about the moors of England and it turns out that Ireland has bogs which are very similar. The bogs in Ireland have actually swallowed up entire forests of trees and over the centuries, many skeletal remains have been found in their grip.

Dylan finds himself in the midst of the bogs while searching for a missing CIA operative. And while he is on his mission in Ireland with Vicki, he finds out his grandmother is dying. It plunges him into a past that he thought he'd left behind forever. And while Vicki is discovering the real reason he left Ireland for America, she harbors a secret of her own.

Right now you can order Dylan's Song from www.pmterrell.com and it will ship before the book is even available in the stores. The initial reviews coming in say this book is my best one yet.

You can also read an excerpt from the book at www.pmterrell.com by clicking on Books.